I really like to have fresh flowers in the house as often as I can.  I usually just pick some up at the grocery store.  But more often than not the bouquets at the store are boring or  too expensive.

Today I am going to give you some ideas about how to make your own arrangements (three!) from grocery store flowers.  You might even save yourself some money! 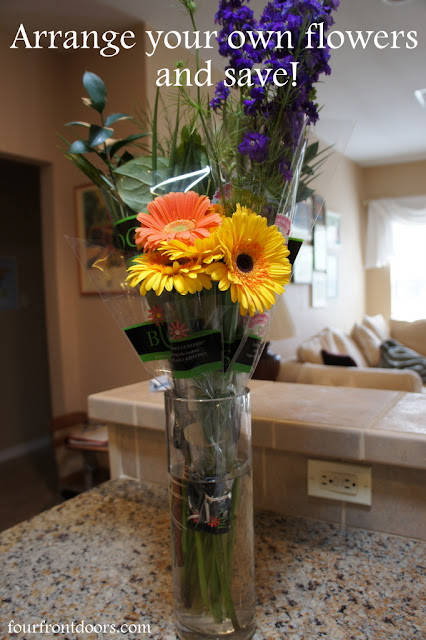 Here is what I got at the store.  Two bunches of gerbera daisies, larkspur (the tall purple one) and a bunch of greenery. 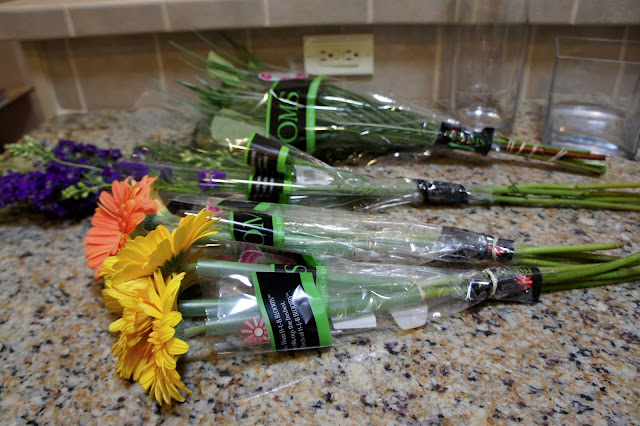 First, decide where you want to put your flower arrangement.  If you are putting it on the kitchen or dining room table, it will need to be low enough so that everyone can see over it!  Nothing more annoying than talking to a vase of flowers rather than your husband.
On the other hand, a tall arrangement can look really dramatic on a side table or end table.
Here is a variety of vases we have collected over the years.  I like the plain glass ones in geometric shapes, as seen below. None of those cheesy, curvy florist shop ones, please! 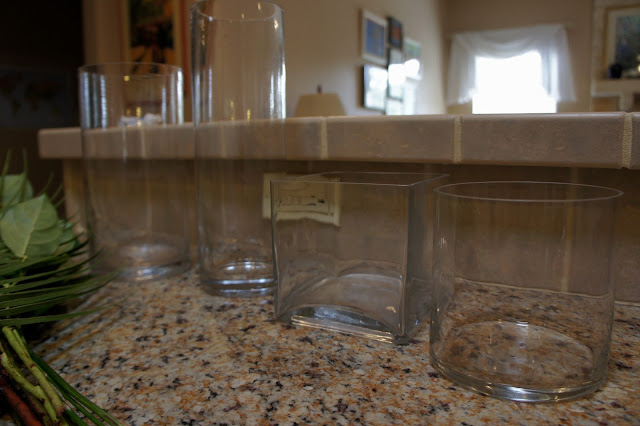 You always want to cut the ends off of your cut flowers so that they stay fresher longer.  But in order to make sure you cut just the right amount, hold your stems  up to your vase to estimate where you want to cut.  I always use our kitchen shears. 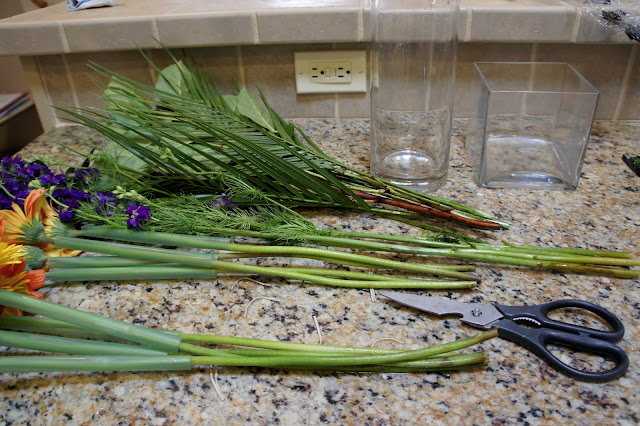 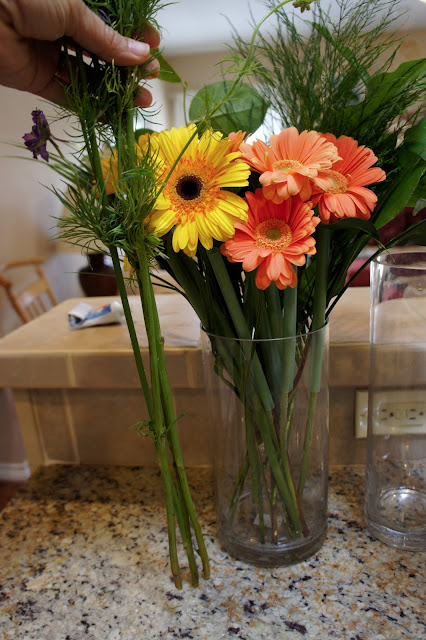 It is best to start with the tall stems, so first I put the tall larkspur and the greenery in the vase.  Don't worry if it's not all the right height; you can go back at the end and trim away.

Then I placed the colorful daisies around the sides.  I had cut them shorter than the other stems so that the color would really pop all around the vase.

Here is the finished product!  A lovely tall arrangement to go in an entry way or side table...anywhere no one needs to be able to talk over it. 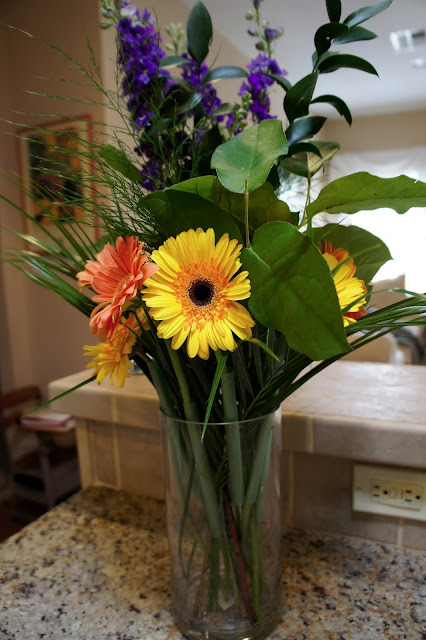 Next, I decided to split the flowers into two different arrangements, one short and one tall.

Here is what I did with the daisies.  I used a short square vase and cut the stems so that the blooms were just above the rim of the vase.  It would be been helpful to have some stones or a frog to hold the stems.  But I made do! 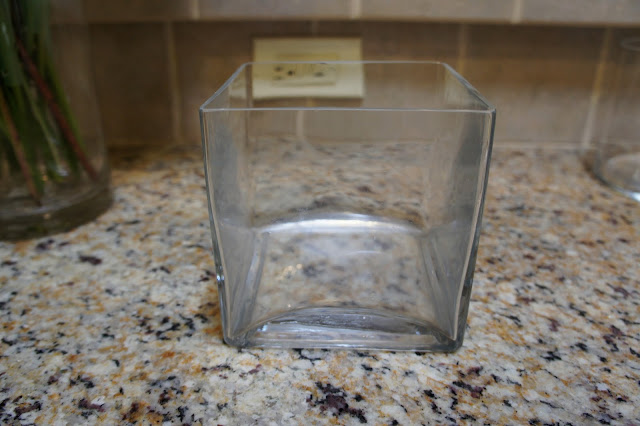 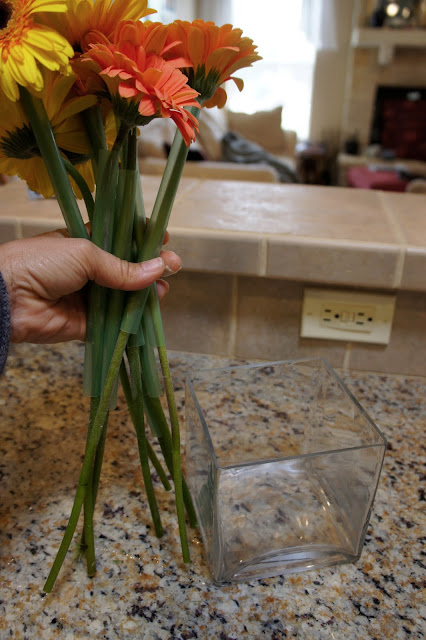 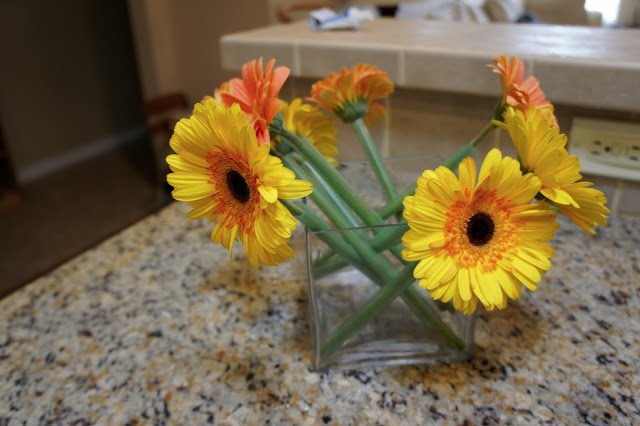 Then I filled in with the greenery.  It was a bit challenging to get the daises upright, but I think it turned out well. 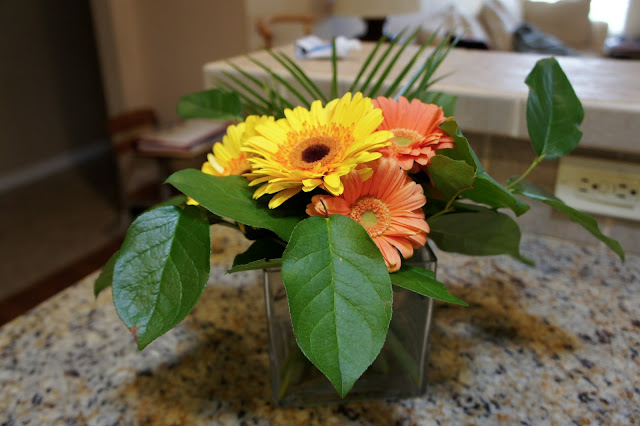 I took the larkspur and remaining greenery and kept them in the tall vase.  I think the final effect is quite dramatic. 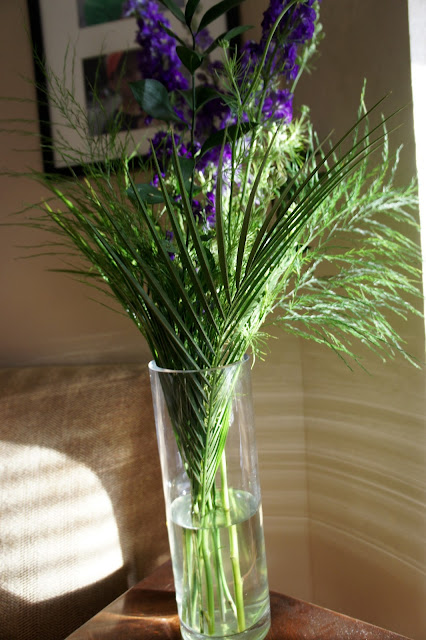 There you have it: three unique flower arrangements just from what I could find at the grocery store! 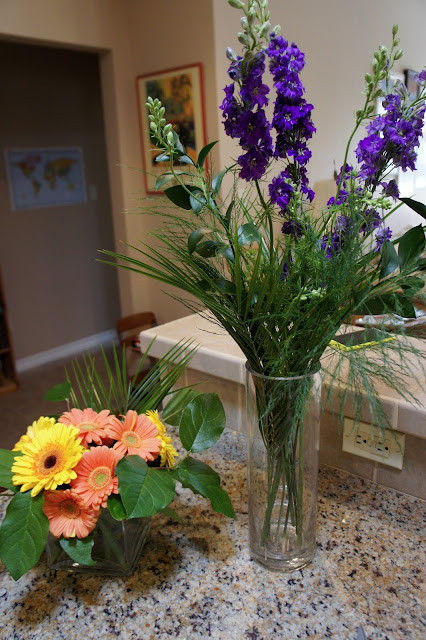 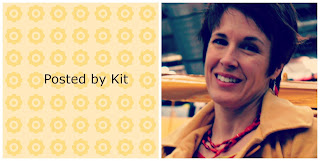